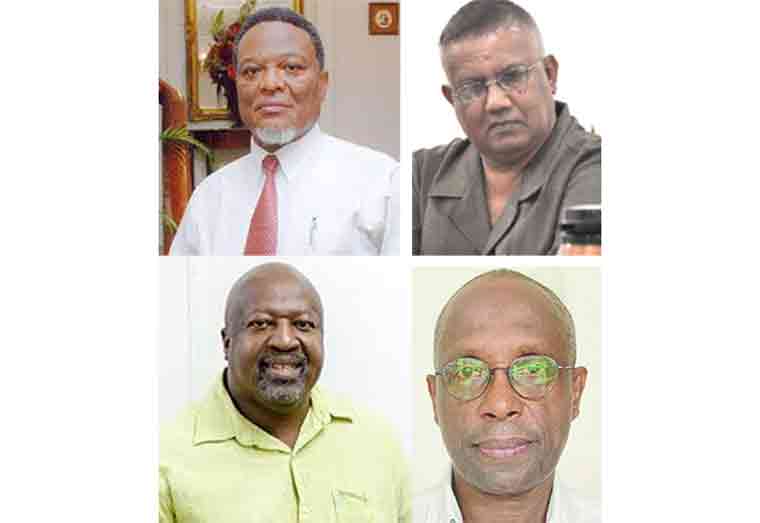 Samuel Hinds, Guyana’s Ambassador to the United States of America (USA), has flagged Gocool Boodoo as the ex-election official attempts to make a return to the Guyana Elections Commission (GECOM) as its Chief Elections Officer (CEO).

Boodoo, who once served as Guyana’s Chief Elections Officer, is among the 20 applicants vying for the post, however, Hinds, a former President and Prime Minister, said given the concerns raised during Boodoo’s tenure, “he may not be a good candidate” for the position.

“We don’t want to go forward with any question,” Ambassador Hinds told Political Activist and Radio Host, Mark Benschop during his online programme “Straight Up.”

During his tenure at the Elections Secretariat, Boodoo had allegedly misappropriated a Linden Constituency Seat in 2006. The misappropriation resulted in the People’s Progressive Party/Civic (PPP/C) receiving a seat that ought to have been allocated to the Alliance For Change (AFC). Incidentally it with Hinds who as prime minister sat in the seat for the PPP/C then in Parliament.

By 2011, the situation further deteriorated. Boodoo was accused of attempting to pass off a fictitious result during the 2011 General and Regional Elections. In the words of Elections Commissioner Vincent Alexander, Boodoo “sought to allocate the one seat majority to the People’s Progressive Party/Civic (PPP/C) rather than to the Opposition to which it rightfully belonged.” In 2013, Boodoo’s contract was not renewed.

Ambassador Hinds said the worst thing that could happen in Guyana is to have a candidate with a questionable background.

The other applicants for the top GECOM position are: Omar Shariff – former Permanent Secretary of the Ministry of the Presidency whose services were terminated in 2017 amid money laundering allegations; Vishnu Persaud – one of GECOM’s former Public Relations Officers (PROs) who had not so long ago applied for the DCEO position but lost to Public Policy Specialist, Roxanne Myers; Attorney-at-Law and Leader of the National Independent Party, Saphier Husain; and GECOM’s Information Technology Manager Aneal Giddings – a GECOM official who found himself at the heart of the controversies surrounding the 2020 Electoral Crisis.

The A Partnership for National Unity + Alliance For Change (APNU+AFC) had called on the Elections Commission to have Giddings removed from the tabulation process on the basis that he was allegedly involved in a secret meeting with Dr. Frank Anthony and Sasenarine Singh at the National Recount Centre.

Leslie Oliver Harrow from Jamaica; Eugene Godfrey Petty from St. Kitts and Dr. Kurt Clarke from the US are among the other applicants vying for the top electoral post.

DIFFICULT TASK
Political Scientist, Dr. David Hinds, in an interview with Village Voice News, said it is always difficult findings persons to fill such sensitive positions as GECOM’s CEO who will be acceptable to both sides of the political divide.

“So, there is never going to be the ideal candidate. My fear was whether persons with known connection to the two political camps would apply. And lo and behold there are at least three persons who are known to be aligned to the PPP. Should this disqualify them from being considered? So far as I know, there is no rule allowing for that. One’s political affiliation is not a criterion for the job,” Dr. Hinds reasoned.

He said one would have thought that given their history, the three applicants who are closely aligned to the PPP/C would not have applied.

“Take someone like Gocool Boodoo. Here is someone who did the job before, so in terms of experience, he would be head and shoulders above the other applicants. But he is known to have been partial to the PPP—he was fingered in the wrongful awarding of an AFC seat to the PPP,” the Political Scientist said.

Dr. Hinds said he is quite sure that candidates such as Boodoo have applied for the job as part of the larger PPP quest to take control of the management of the electoral architecture.

“That party is determined to have a GECOM secretariat that is controlled by persons sympathetic them. It is for that reason I support the proposal that an independent panel rather than the seven partisan commissioners be given the task of shortlisting the best candidates and interviewing them. It is not the ideal arrangement, but at least it removes the perception and reality of overt bias,” Dr. Hinds said.

“Of course, the question arises over who can be considered independent,” he posited.

Political Analyst, Dr. Henry Jeffrey said while anyone could apply for a position, Boodoo’s application could very well be a “camouflage” to distract persons from the real candidate they intend to push.

Dr. Jeffrey said the person appointed to the position must understand the Electoral Laws of the country.

He, however, underscored the importance of generating a refreshed List of Electors in keeping with recommendations made by the international observers. He said too that the successful applicant ought not to be partisan.

“In the end their charge is ultimately to manage a machinery that is capable of producing credible elections. One is tempted to say that it doesn’t matter who the CEO is, since that person can be overruled by the Chairman of the Commission. At least that’s what the CCJ said. The question is whether the Chairman is prepared to use that “power” in the same way as she ultimately did during last year’s impasse. In other words, is she prepared to over-rule a CEO perceived to be partial to the PPP?” Dr. Hinds added.