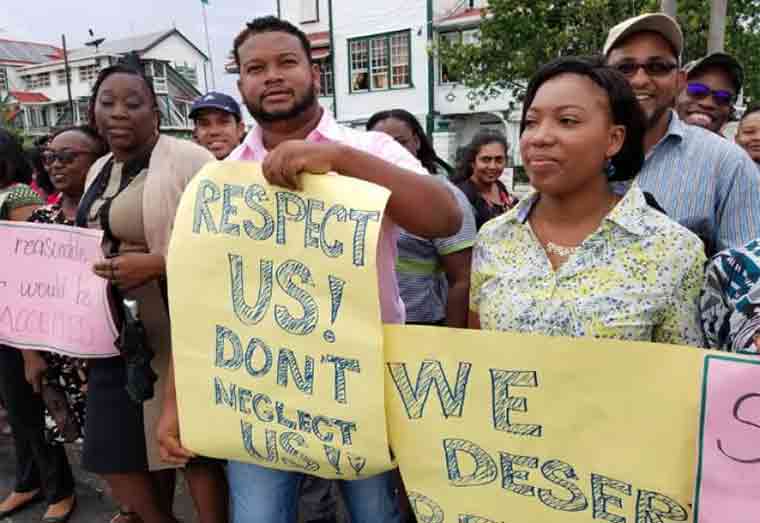 Government’s announcement that public servants will receive a 7% salary increase in December, after a two-year hiatus, has been rejected as unlawful and offensive by trade unions across the country coupled with a number of political parties.

In making the announcement, Senior Minister of Finance within the Office of the President, Dr. Ashni Singh said the increase will be paid retroactively for the period 2021, however, it will not be tax-free as was done by the previous A Partnership for National Unity + Alliance For Change (APNU+AFC) Administration.

The 7% increase is minute when compared to the 50% increase reportedly promised by the People’s Progressive Party/Civic (PPP/C) on the campaign trail ahead of the March 2020 General and Regional Elections. Minister of Public Service, Sonia Parag, in defense of the Administration, said the PPP/C never promised a 50% increase. In fact, she said the posters, which were seen by Guyanese depicting a promise of a 50% increase for public servants, were “photo-shopped.”

In a statement, the Guyana Public Service Union (GPSU) said the entire fiasco is a “display of executive lawlessness by the Government,” and must be remedied by President Irfaan Ali.

During an emergency meeting convened on Friday, November 19, 2021, the Union’s President Patrick Yarde and its Executives concluded that the proposed increase is “illegal,” and ought not to be tolerated.

“Their actions constitute a violation of Article 147(3) of the Constitution of the Cooperative Republic of Guyana, Section 23 (1) of the Trade Union Recognition Act 1997, International Labour Organization Convention 151 which was unanimously ratified by the Parliament of Guyana and is currently in force, and the legally binding Agreement between the GPSU and Government of Guyana for the Avoidance and Settlement of Disputes,” GPSU stated.

In light of the breach, the Union wrote President Ali to not only register its concerns but to insist that the blatant disregard for the Constitution, the International Labour Organization Conventions and Laws of Guyana, he corrected.

The Attorney General and Minister of Legal Affairs, Mohabir Anil Nandlall, who is responsible for ensuring that the Government conducts the affairs of the State in conformity with the Constitution and Laws of Guyana, was also written to.

GPSU said it expects early responses to its correspondence and urgent action to address the imminent humanitarian crisis that is confronting Public Sector workers.

Hours after the announcement was made on Thursday, the Guyana Teachers’ Union (GTU) said the 7% salary increase for public servants inclusive of teachers is an insult to the nation’s educators, and an attempt to devalue them.

As such, it demanded that the increase be tax free, and that an additional $200M be set aside for teachers who have been working throughout the pandemic.

Noting that teachers did not receive an increase in 2020, the Union said the announcement has essentially awarded teachers a 3.5% increase for 2021.

“Since COVID 19 came to the shores of Guyana, teachers have found innovative ways to service the nation’s children with no support from the government in the areas of gadgets, internet, and electricity. Additionally, our teachers have labored like slaves, where they went into the communities to distribute and collect worksheets. Our ministry did not even recognize their heroic efforts for the most part,” GTU said.

It said the present multi-year agreement that remains enforced speaks to teachers receiving 8% in 2019, which was non-taxable.

GTU said the Minister of Finance, Dr. Ashni Singh ought to have been ashamed to announce that the increase will be paid together with salaries in December 2021.

“A retroactive increase for 2021 will be added to December salary then taxed. It means that teachers will take home less than 4%,” it reasoned.

It said too that due to the proposed increase, items on the local market will further skyrocket, and the ‘7%’ will not be able to cushion the impact. “The pittance cannot cushion the inflation taking place in Guyana presently. Essentially, we will be worse off than when we started,” the union said.

According to the Union, teachers will be hard press to feed themselves and family this season because of the high cost of living.

In a statement on Saturday, the Guyana Trades Union Congress (GTUC), while condemning the move by Government, said it stands in solidarity with teachers and public servants, who are demanding that the Government respects the collective bargaining agreements.

GTUC said the imposition is an assault on the rights of Guyanese, and the Rule of Law by the PPP/C Government.

“It comes as no surprise the recent eyes pass committed against public servants and teachers with the imposition of a seven-percent increase. This increase is not only miniscule given the escalation of cost of living in the last year but the arrival at the sum violates the tenets of good industrial relations practices, and a stable industrial climate,” the Trade Union Congress said.

Like GPSU, GTUC pointed out that Government’s failure to uphold the Collective Bargaining Agreements is a breach of the International Labour Organisation Conventions Nos. 87, 98 and 151; Article 147 of the Constitution of Guyana; and Section 23(1) of the Trade Union Recognition Act.

“The paltry seven percent confirms the opinion of many that the Ali/Jagdeo regime will take the taxes paid by teachers, public servants and others and lopsidedly distribute to friends and cronies which clearly shows biases that will not augur well for the solidarity of the working class and ethnic relations,” it contended.

The Trades Union Congress said in 2020 the Government refused to engaged GPSU and GTU, and this year is no different.

“GTUC calls for respect for the rights of teachers, public servants and all workers of Guyana who are represented by trade unions. These rights were fought for and should not be ceded, regardless of who is in government or is the employer,” the union said.

It also accused the Government of engaging in a divisive strategy of pitting groups against groups, race against race, sectors against sectors – such, the Union said, does not augur well for Guyana.

“Guyana is also not unaware of government’s biases towards some unions and their tendency to trample the rights of workers represented by unions considered independent or non-aligned,” it said.

In another statement, the Working People’s Alliance (WPA) condemned Government for offering public servants a meagre 7% increase on their already unlivable wages.

“Only a government that is contemptuous of the workers could offer such a scandalous package to a section of the labour force that is charged with managing government institutions, protecting the nation, providing healthcare and educating our children among other critical tasks,” WPA said.

It said the meager percentage, which will amount to $4,900 for public servants earning minimum wage, is being offered at a time when the cost of food and other essential items have risen astronomically.

“When one adds taxation to the mix, the real value of the proposed increase is further diminished. What is a 7 percent increase in wages against the backdrop of a fourteen percent increase in food costs? Any head of household will tell you that that amounts to negative growth in earnings,” it reasoned.

WPA added: “For all intents and purposes this is not a salary increase—it is yet another cash giveaway, but, when one takes into consideration the government’s announced package of $250, 000 to each sugar worker, this offer to another critical section of the workforce represents a tiny fraction of the former.”

It submitted that the comparison of the two payouts suggests clear discrimination on the part of the Government. As such, it said the governments should be mindful of the ethnic impact of policies and actions in a country which is sharply divided along ethnic lines.

It said aside from the insignificant increase being offered, the Government continues the illegal practice of ignoring its collective bargaining responsibilities and imposing a wage package without agreement with the workers’ unions.

“The continued refusal to meet with the unions to discuss their proposed demands has further tarnished Guyana’s image as country committed to the primacy of labour as a factor in national development. Further, it is a betrayal of the PPP’s own historical commitment to the working class,” the alliance said.

In light of the growing concerns, WPA used the opportunity to remind Guyanese and the Government of its proposed Cash Transfer Initiative, which will see equitable distribution of funds.

“For now, WPA believes the government in the shortest term should modify the current proposal. It should call the unions to an emergency meeting and work on a consensus ‘Christmas” package that should among other things increase the offer, remove the taxes and make it retroactive to the last salary increase (2019). But this should not be a substitute for a real wage package. Hence agreement on this relief package should be tied to immediate talks on a structured wage package with the unions,” the WPA submitted.

The country’s leading Opposition party – A Partnership for National Unity + Alliance For Change (APNU+AFC) – had also condemned the proposed increase, describing it as insignificant when one takes into consideration the steep rise in food prices and costs of living.

“After two budgets totaling 712.6 Billion dollars and the projected receipts of almost US $80 million from our next oil lift, the PPP has determined that public servants deserve an across the board, taxable 7% salary increase,” APNU+AFC said as it registered its dissatisfaction.

Finance Minister, Dr. Ashni Singh, in making the announcement, had boosted of the menu of relief measures implemented by the Ali Administration since August 2020, however, the coalition said Government’s reference to its one-off cash grants over the past months is no more than a weak attempt to justify this inadequate increase. It said Guyanese are well aware of the inequities associated with the distribution of those grants.

“…. after just 18 months in office from July 1 2015 to January 1 2017, the APNU+AFC increased the minimum wage by over 50 percent, increased the income tax threshold by 20 percent, reduced the marginal income tax rate to 28 percent and removed the tax from employees’ contribution to the National Insurance Scheme (NIS). In addition, old-age pension increased by 45 percent and public assistance by 27 percent. Further the marginal rate of income tax for non-commercial companies was reduced from 30 percent to 27.5percent. All of this, without receiving one dollar in oil revenues,” the coalition detailed.

It said while in Government, it consistently ensured that senior public servants were awarded a lower percentage increase than junior public servants, thereby ensuring that the income gap would reduce overtime. “The PPP’s single rate across-the-board increase is intended to widen the gap between those who have much and those who have little. This should not be a surprise as it has always been the PPP’s approach,” APNU+AFC said.