Guyana worse off with Chinese than under colonial rule – Chris Ram

Guyana worse off with Chinese than under colonial rule – Ram

…says this form of colonialism is more ruthless; without conscience

Kaieteur News – Amid concerns about Chinese’s growing influence in Guyana, Chartered Accountant and Attorney-at-Law Christopher Ram said, based on interactions in his circle, it was suggested that “if one were to do an economic analysis we are worse off now with the Chinese than when we were under colonial rule.” 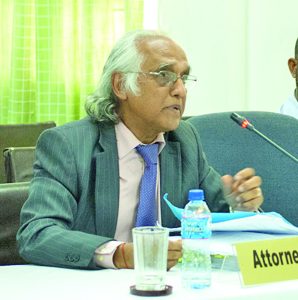 This newspaper has reported heavily on Guyana’s relationship with China which was established decades ago and the exploitation of this country’s resources by Chinese companies operating here.
Ram made the comments while being a guest on Dr David Hinds’ online programme Politics 101 Tuesday night. He opined that at present in Guyana, “the Chinese control just about everything” and have in fact managed to infiltrate every village across the country.
Lamenting, another aspect of the state of affairs with regards the Chinese and their operations in Guyana, Ram told Hinds, “I know of one area where they are almost a law onto themselves.”
The Chartered Accountant was at the time responding to a question posed to him by a member of the public inquiring into his views. During the interactive session, he spoke about the need for a complete rewrite of the constitution in a fashion that addresses governance, outdated laws, and eliminates any remnants of colonialism.

Ram said Guyana is worse off with the Chinese operating here and posited, “…we are getting a different form of colonialism and it’s probably more ruthless and without any conscience.”
Among the more recent reportage involving Chinese’s relations with Guyana’s includes the award of two contracts for the construction of two of the country’s largest ever projects namely the construction of a New Bridge across the Demerara River and the Amaila Falls Hydro Electric Project (AFHEP)—estimated to cost in excess of US$1B. 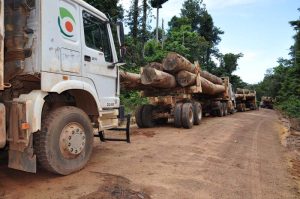 Government at the beginning of the month had announced that it retained controversial Chinese contractor, China Railway First Group (CRFG). That same company had previously signed a contract to build the said project several years ago and to be paid for by power purchased from the project. Under that arrangement the Chinese would Build Own Operate [and then] Transfer (BOOT), the hydroelectric plant.
As regards the new bridge across the Demerara River, the administration announced that a Chinese company which was accused of fraud by the World Bank secured the contract for US$257M.
This, in addition to reports since confirmed by Vice President Bharrat Jagdeo, who told reporters during a recent press engagement that Guyana was exploring a line of access to credit to the tune of some US$1.5B.
Outside of China National Offshore Oil Company’s involvement in the oil sector operating as an ExxonMobil partner in the Stabroek Block, there are a number of Chinese owned companies operating in the other extractive industries, namely mining and forestry.
Among some of the companies that would have made headlines in recent times with regard to their practices in Guyana is Zijin Mining which operates the Aurora Gold Mines. The numerous lamentations with regard this company and its operations are rooted not only in its perceived ‘lucrative’ mining licence and concessions bonanza but its mistreatment of workers. This company, having mined out the ore from its original mining pits, has since announced plans to begin underground mining.
Another Chinese’s company operating in Guyana that found their performance locally wanting/lacking and coming under scrutiny, is the China Harbour Engineering Company (CHEC) and relates to the renovation of the Cheddi Jagan International Airport (CJIA).
Lamentations over this project include the manner in which the contract was inked secretly in Jamaica, the number of years ongoing, the cost overruns and numerous extensions among other complaints.
That contract, which was initially inked at S$150M, has since exceed that sum but according to Public Works Minister, Bishop Juan Edghill, would not run past US$200M.
Another one of the companies that had come in for flack in recent months is the one working on the rehabilitation of and expansion of the Sheriff Street/Mandela road—a $1B project.
This publication reported last month that the Chinese Company working on the project, Sinohydro Corporation would not be able to meet the October 31 deadline for completion because of shipping delays.
Sinohydro was awarded the contract in 2017 and works began in 2018. It was supposed to be completed already but was plagued by constant delays.
One of the excuses it had given regarding its failure to meet the project deadline was that it had to halt works during the five-month gridlock over the March 2, 2020 General and Regional elections. Works recommenced after it ended in August 2020 and a new deadline was set for August 4, 2021.
Sinohydro was unable to meet that deadline and a new one was set for August 31, 2021.
It did not meet that deadline either. They were granted until October, 31, 2021 but will be unable to meet this deadline also, due to the rain.
Last month too, this publication reported that despite bidding higher than local contractors, a Chinese company, Shandong Degian International, was still awarded a contract to rebuild the St. Rose’s High School located at Church and Camp Streets, Georgetown.
Included in the litany of complaints that were raised publicly, about the practices employed by Chinese companies in Guyana in recent years, is the US$200M botched by the Chinese contractor, China National Technical Import and Export Corporation (CNTIC).
The state of affairs with regards the practices employed by Chinese companies in Guyana had even seen the Guyana Revenue Authority back in 2017 launching a probe into an alleged racket in which the Chinese embassy was used to bring in containers of goods for its nationals who are operating businesses here.
GRA had in 2017 reportedly stumbled on what seemed like an abnormally large number of containers brought in by the Chinese embassy.
As a matter of fact, when GRA officials checked, they found that the Chinese embassy brought in more containers than all the other embassies combined.
Investigators initially believed that maybe there was a mistake with the number of containers.
However, further checks confirmed that the embassy allegedly used its diplomatic channels to pass the containers through the wharves.
Under the diplomatic arrangements, shipments and packages for embassies are not too closely scrutinized.
It is the belief that the containers were filled with all sorts of items – from hardware and other accessories – which eventually ended up in a number of Chinese-owned stores. It meant very little or no taxes were paid on the items.
Kaieteur News was not told exactly how many containers, but officials insisted that they were enough to be equivalent to tens of millions of dollars in lost taxes.
Contacted this week, Commissioner-General of GRA, Godfrey Statia, was reluctant at the time to delve into details.
The Chinese ‘takeover’ as was lamented in a feature some years ago published by the Kaieteur News had delved into the plethora of Chinese owned businesses that had begun popping up in Georgetown, the country’s capital city and central business hub, especially Regent Street.
Amidst the challenges, many local businesses have closed their doors but there are a few local Regent Street businesses which have found a way to reinvent themselves to keep offering their services to the Guyanese populace.
“Chiney selling everything now; from rope to soap.” one commuter commented. “With the number of Chinese’s stores they got in here, I think the Government should rename Regent Street, Chinatown,” he added.
It is no secret that the Chinese are offering everything that the local businesses have but at a cheaper price, and the visitors seem to take full advantage of it.
It was even observed, that some Chinese operated stores even have Portuguese and Spanish names targeting the ever increasing migrant population.

Guyana Manganese Inc. (GMI), a subsidiary of the Bosai Minerals Group is another of the Chinese companies operating in the Mathews Ridge area involved in mining for manganese.
In addition to the numerous complaints against the company in relation to its environmental dangers, the company has also been accused of inhumane working conditions for local employees.
Another company to have featured prominently about its operations in the Forestry Sector is
Bai Shan Lin.