Attacks on Appellate judges condemned…contend intention is to discredit judges ahead of appointment of Chief Justice, Chancellor By Svetlana Marshall 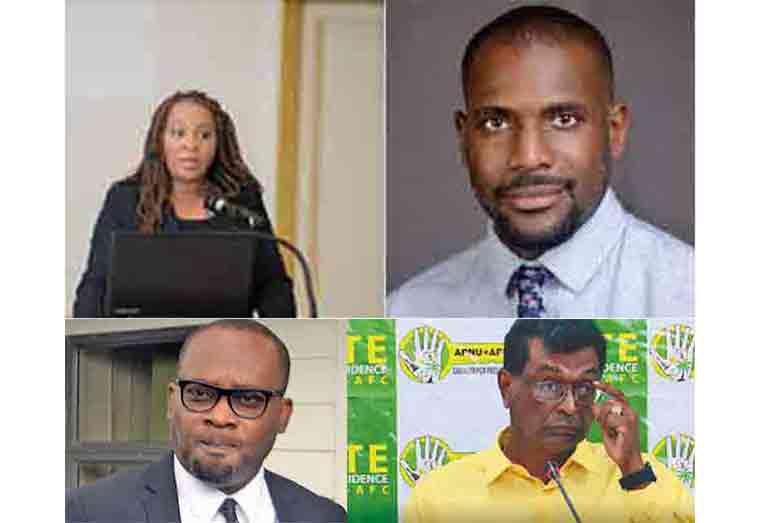 …contend intention is to discredit judges ahead of appointment of Chief Justice, Chancellor

In condemning what he described as an attack on Guyana’s Court of Appeal by two University of the West Indies (UWI) professors, Leader of the Alliance For Change (AFC), Khemraj Ramjattan, MP, expressed the view that the recent analysis of Guyana’s Judiciary is not only deeply flawed, but is intended to negatively influence the process of appointing Justice Yonette Cummings-Edwards as the substantive Chancellor of the Judiciary, and Justice Roxane George-Wiltshire as the substantive Chief Justice.

Ramjattan, who received the backing of Senior Counsel Roysdale Forde, MP, was at the time responding to a series of questions posed by Political Scientist, Dr. David Hinds during his online programme Politics 101 on Tuesday.

During a virtual presentation on “The Judiciary and the 2020 Guyana Elections,” UWI’s Law Professor, Dr. Ronnie Yearwood and Professor Cynthia Barrow-Giles, who specializes in Political Science, brought into question the independence of the Court of Appeal, and in doing so, drew a distinction between the rulings handed down by the High Court and those delivered by the Appellate Court when compared to the Caribbean Court of Justice (CCJ).

“It seems often that the High Court and the Caribbean Court of Justice were on similar wavelengths and similar thoughts and reasoning. It was often the Court of Appeal where the judgement seems to go awry and then the CCJ correcting the Court of Appeal to say actually what the High Court originally ruled as the exclusive court to deal with electoral matters was right so we often saw that happen,” Professor Yearwood said.

While stating that she wished not to “impute anybody,” Professor Barrow-Giles, who headed the CARICOM Recount Team to Guyana in 2020, contended that some of the judgments that emanated from the Appellate Court were “highly questionable.”

Asked to weigh in on the matter, Ramjattan, who is also an attorney, said the sentiments expressed by the UWI professors were “very undiplomatic.” He said the attempt to insinuate that Guyana’s Court of Appeal is not independent on the basis that the CCJ has overturned its decisions on numerous occasions, while upholding rulings of the High Court, is simply flawed.

“…it was a terrible mistake they made,” the AFC Leader said. He told Dr. Hinds that the timing of the professors’ deliberation on the “Judiciary and Guyana’s 2020 Elections” is also highly suspicious.

Ramjattan said that the Professors are fully aware of the call by political parties in Guyana for Justice Cummings-Edwards and Justice George-Wiltshire to be appointed the substantive Chancellor and Chief Justice respectively.

He posited that the ruling People’s Progressive Party/Civic (PPP/C) Administration may want to rely on the “professors’ attack” to justifying their failure to confirm the judicial officers to the substantive posts.

Senior Counsel Roysdale Forde, while reposing confidence in Guyana’s Judicial System, said there is nothing peculiar about the country’s apex court overturning a decision by either of the lower courts. Such, he posited, is normal as he pointed to the judicial systems in the Commonwealth and even the United States of America.

He submitted that one of the cases in which the Professors relied upon was overturned by both the High Court and the Court of Appeal but upheld by the CCJ. The case in question surrounded the appointment of Justice (Ret’d) James Patterson as Chairman of the Guyana Elections Commission (GECOM) in 2017 by then President David Granger.

Both the High Court and the Court of Appeal had ruled in favor of Patterson’s appointment, however, the CCJ, in 2019 ruled that his appointment was unconstitutional.

He said while passing judgment, the Professors failed to analyzed the decisions of the various Courts. “We have not seen in their presentation any analysis of the decisions to say that they are questionable,” he posited.

Forde said too that the professors’ pronouncements came days ahead of the preliminary hearing of the Elections Petition Case – Monica Thomas v Keith Lowenfield and other – at the level of the Court of Appeal.

Pointing to the five-month electoral impasse, Forde said in a similar fashion, the Diplomatic Community issued statements relating to the elections, days and sometimes hours ahead of a court ruling.

Both Forde and Ramjattan underscored the importance of respecting the Courts’ decision. The Senior Counsel submitted that the Courts’ involvement in 2020 Elections now offers the Caribbean a blue print on how to resolve similar matters while maintaining stability in society.

However, Forde said he would not be surprise if the Guyanese Government was behind the entire attack.

Adding his voice to the issue at hand, Dr. Hinds said while there is nothing wrong with academics critiquing the country’s Judiciary, the Professors appeared have been “cherry picking.” The Political Scientist said while the High Court received a vote of confidence from the Professors, the Appellate Court was brought into disrepute.

What about Poor People?