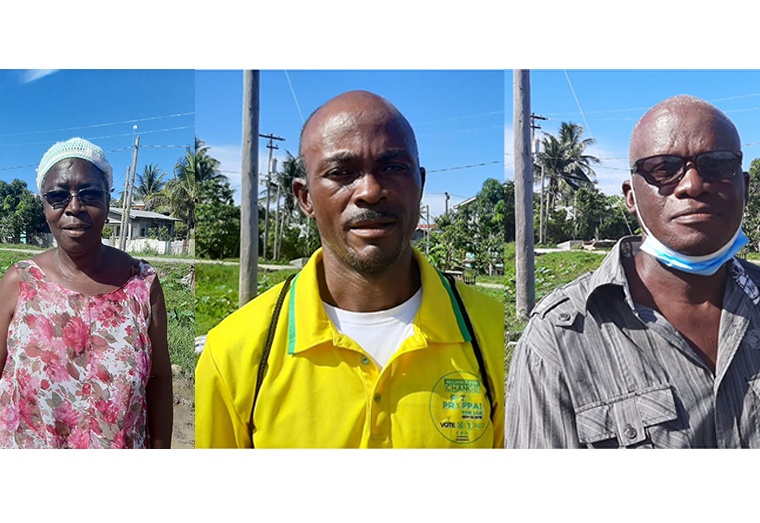 …villagers want lands for residential use, NDC wants it to graze cows

With a drastic decline in cattle rearing, some residents of Den Amstel – a village located on the West Coast of Demerara – believe the time has come for them to transform a section of their agricultural lands into residential lands, however, support from the Neighbourhood Democratic Council (NDC) is reportedly lacking.

When Village Voice News journeyed to the village last Thursday, residents complained bitterly about the situation. They have accused the NDC of proposing to the Ministry of Agriculture that cows be brought from Wales to graze in the pasture in Dem Amstel Backdam but the Chairman of the NDC, Kenton Hilliman has refuted the allegation.

Rhonda Layne, a resident, explained that Den Amstel was an old plantation bought by ex-slaves in 1854. She said once the village was bought, the freed Africans allocated lands for residential purposes – the township; agricultural and recreational use.

The 60-year-old woman said the cows rarely ate the grass, and many farmers took their cattle elsewhere. “Because the older people die off, and they got rid of most of the cows…” she posited.

Layne said due to the decline in cattle rearing, and the expansion of households, the younger generation recommended that the lands be repurposed to accommodate the expanding community.

She said contrary to the recommendation made by the younger residents of the village, one of the NDC Councillors, George Langevine, proposed that a state-of-the-art abattoir be constructed on the land and cows be brought from Wales and other parts of the region.

Layne contended that when this proposal was not met under the previous A Partnership for National Unity + Alliance For Change (APNU+AFC) Administration, it was proposed to the PPP/C Government, after the change in Administration took place in August 2020.

“He is trying now to let cows come all the way from Wales to take up residence in that same area there, and they will have them under strict security…well that is what the people of Den Amstel are fighting against,” Layne explained.

But Councillor Langevine, who has committed to providing Village Voice News with extensive response, rejected the claims that he proposed that cows be brought from Wales.

Clayton Jacobs, another resident, told Village Voice News that a group of residents approached the NDC to transform the pasture to a housing scheme given the increasing need for house lots.

“We took in all the necessary documents into the village office and they only telling us to wait and wait,” Jacobs said.

Jacobs, 51, said that the group has designed a plan for the area and has already shortlisted potential applications. “We took in all the relevant documents, all they have to do is say go ahead and we are ready. We have companies ready to bring the equipment to mark out the area for us, we have people who are ready to dig out the drains for us but the Village Office, the Chairman, by the name of Kenton Hilliman and Councillors, they are denying us,” Jacobs complained bitterly.

He said it was with great shock and disappointment that residents of Den Amstel learnt that Councillor Langevine was actively engaging the Ministry of Agriculture.

“Our lands are private lands; this is not government lands. This land belongs to all of us who have ancestral ties here. Our ancestors bought this land for us, they pooled money in wheel barrow and help bought this village,” Jacobs said.

Jacobs expressed disappointment that the matter was raised with the Opposition – for which People’s National Congress/Reform (PNC/R) forms part of – and to date the opposition officials have not visited the area.

James Martin, another resident, who had returned from the pasture said he had to chase off approximately 15 cows and horses away from the area. He said there were fewer cows prior to Thursday, but the number has since increased. The man, who took the bold step to commence the construction of his house, said the cows are a threat to his foundation.

Another resident, Andrew Miggins said the young people should be able to access land to develop themselves. “I don’t know why those in the Village Council, fighting down these young people for a piece of land to build their house. It is a fact that over two decades ago, the land was supposed to be pasture for cows, the building supposed to be an abattoir, over two decades ago but since then I was made to understand that is only one,” Miggins said.

Chairman of the Den Amstel NDC, Kenton Hilliman rubbished claims that the NDC and or Councillors have proposed that cows be brought from Wales. He said, however, that the Guyana Livestock Development Authority (GLDA) has expressed a willingness to rehabilitate the Abattoir in the pasture for the benefit of cattle farmers in the village.

He said while the NDC understands the concerns of residents, it also understands the importance for maintaining the pasture to allow for the cows to graze. He explained that the area must always be available to avoid the cows from venturing into the rice lands.

Granger could turn the APNU into his new party

‘Guyana, democracy, and the Biden doctrine’

The 2020 election: The real story is yet to be told