African Guyanese are due reparations from post-colonial Administrations

Cuffy250 has sided with the Caribbean Community (CARICOM) to demand from Europe repayment for the damage that was caused, specifically during the time of African slavery. The organization is adamant however that African Guyanese are also due reparations for the nation’s post slavery administrations. 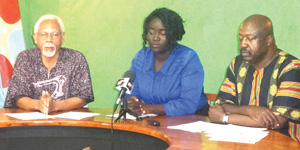 Executive member of the cultural group, Dr. David Hinds is of the belief that not only are African Guyanese due reparations from the European colonizers, but also from the country’s Administrators who would have taken possession of lands bought and paid for by freed African slaves.
Hinds, during discourse with the media last week, said that, “African Guyanese are due reparations from their own government.” He opined that local reparations should be part of Guyana’s strive to earnestly address the issues that have faced the African Guyanese slave descendants.
“African ancestral lands are being appropriated for private elite people in this country. In the villages, the people are losing their land, and the State, the government is playing a role in facilitating this kind of thing.”
Following slavery, freed Africans pooled their resources and bought villages across the country from colonial masters. Victoria on the East Coast was the first village bought. Beterverwagting, Buxton and Friendship were among the several villages bought by African slaves.
“We think that as part of this reparation movement, we have to call on our own government to account, and give back ancestral lands. Amerindians have fought very hard for access to the land they occupied.
These ancestral African lands are lands that our fore parents /ancestors bought. As far as you (Administration) have appropriated them, you have stolen those lands. So we feel that the reparations move ought to be broadened to include reparation, not only from colonizers, but post colonial administrations that have misappropriated African lands.”
Another key member of the organization, Dr Norman Ng-A-Qui explained that (from a historical context), between 1638 and 1838, when the foundation of Guyana was being laid, it was only Africans here. “So, the slavery activities that went on into 200 years, there were no Indians here, they arrived later. When we talk about reparations for that time, there was nobody else involved, only Africans.”
Dr. Ng-A-Qui and Dr. Hinds both agreed that the management of the national effort to attract reparations should be conducted by African Guyanese.
“Therefore self determination”, Dr. Ng-A- Qui urged, “has to be done and totally managed by Africans because the rest of the people were not here; no East Indians, no Chinese. Remember they came to a slavery free environment which was paid for by the blood of Africans who built the foundations of this country, and all the economic foundations including sugar plantations and so forth between 1638 and 1838.”
“There is a genuine and very firm reason for wanting Africans to manage and control totally, what happens with respect to reparations for that part of refund. Nobody else was here. Indians arrival- as they would say themselves- were based on government sponsored finance programs after the blood, sweat and tears of millions of Africans. They have absolutely no claim to any of that.”
Dr. Hinds said CARICOM’s move is a giant step. Reparation is overdue, but it is a welcomed initiative. Hinds said that Cuffy250 is however uncomfortable with the way it is being rolled out because, “there is a difficulty in a country like Guyana where the government is an Indian Guyanese dominated government overseeing this whole issue of reparations.”
“Cuffy250 believes that there is still a place in our multi ethnic -society for self determination.”
Hinds reiterated that on the issue of reparations, it should be “directed, planned and executed by African Guyanese. We don’t’ think that principle is being followed, but we don’t think because this situation exists that we should abandon the reparation project.”