Share on FacebookShare on Twitter
FacebookWhatsAppTwitterLinkedInCopy LinkEmailShare
Support Village Voice News With a Donation of Your Choice.

Political analyst, Dr Henry Jeffrey has accused the local media of shrugging off their post-elections role by failing to report on important matters related to last year’s General and Regional Elections, even as he cited Stabroek News for chopping out large portions of his analysis of the US State Department report on Guyana in his recent Future Notes column.

He said this behaviour by the media is one of the key reasons that many stubborn hurdles remain along the path to a more democratic Guyana. Dr. Jeffrey spoke to the Village Voice News from the backdrop that his recent column submitted to and published in the Stabroek News April 7, 2021 edition, saw a chunk of his expressed position on the very matter being edited out. In his multi-year relationship with the newspaper, Dr. Jeffrey said that his column ‘Future Notes’ had not been chopped. However, in his recent piece titled ‘A ding-dong political struggle portends’, where he examined the 2020 US State Department Country Report on Human Rights Practices in Guyana, select portions were eliminated. Dr. Jeffrey’s column examined three key points: the arbitrary arrest of Opposition Chief Whip, Christopher Jones and the search of his home although he had a court-issued injunction preventing such; the role of the media in post-elections; and the nature of the present government.

While the edited column kept the introductory paragraph which establishes the three points, it eliminated the meat of the matter of the second point which spoke to the “role of the media in post-elections”. Therein, Dr. Jeffrey had examined the statement within the US State Department Report that “the PPP/C won by a margin of 15,000 votes against the APNU+AFC coalition, and Mohamed Irfaan Ali of the PPP/C was installed as President on August 2.” 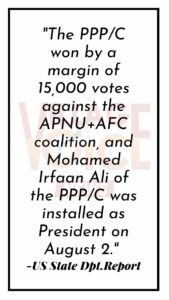 He made the point that until the election petition is completed, the President is — as the report stated — “installed” because the elections that led to his presidency is being contested. He explained his position that most parts of the media have chosen not to justly report on the election petition which could have great implications should it be deemed that the elections were flawed. Dr. Jeffrey had submitted in his column: “‘The PPP/C won by a margin of 15,000 votes against the APNU+AFC coalition, and Mohamed Irfaan Ali of the PPP/C was installed as president on August 2’ would not have raised an eyebrow. After all, regardless of what was actually meant, until the election petitions are completed, legal certainty about the nature of the government is not established and this should have been the commonplace understanding.”

The aforementioned excerpt is part of over 300 words that were removed from his column. In his opinion, by such acts, the media prove a continuation of the influential role it played in the events that took place during the elections. It shows clearly, he said, that the private and public media choose to ignore or include information based on an established agenda.

“Nowhere has this been more advantaged, been more glaring, and arguably damaging to political progress in Guyana than with regard to the evidence of elections manipulation provided by the Chief Elections Officer, Mr. Keith Lowenfield, in spite of the fact that initial attempts by the Chairperson of GECOM to verify his position should, at the very least, have suggested that there was substance to his claim,” another portion of his deleted column stated. 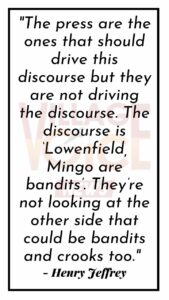 Mentions about past manipulations of elections by the United States and the misuse of political parties of the right of the Guyanese diaspora to return home to vote were also eliminated. When speaking with the Village Voice News, Dr. Jeffrey added that some parts of the media are dead set on selling the position that everything to do with Guyana’s 2020 elections is over and final though a petition sits before the Court and though many questionable inconsistencies occurred during the elections.
“I would like to see those views expressed because they are important views in terms of how Guyana goes forward,” he said. “Guyanese are not avoiding speaking about [these issues], it’s the press. The press are the ones that should drive this discourse but they are not driving the discourse. The discourse is ‘Lowenfield, Mingo are bandits’. They’re not looking at the other side that could be bandits and crooks too.”

With such a call for a shift of focus, the political analyst said that it is expected that some in Guyana’s politically charged society will assume that he favours one side over the other. However, he said that his point is simply to encourage the media to do better and to act fairly in the interest of the nation.