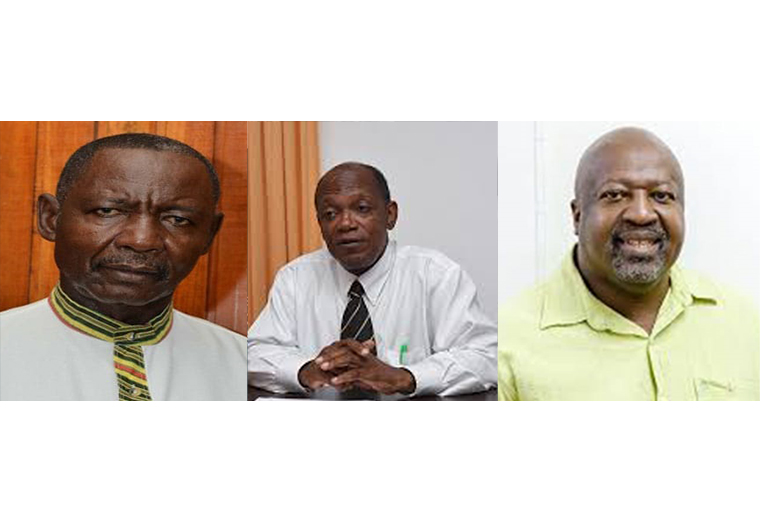 Confronted by increasing attacks on Afro-Guyanese, some of the country’s leading African Leaders are calling for the creation of an African Guyanese Development Plan and a Black Cultural Revolution in Guyana to push back against the oppression, suppression and the demonization of Afro-Guyanese people.

According to Dr. Hinds, since the People’s Progressive Party/Civic (PPP/C) took office on August 2, 2020 – some seven months ago – Guyana has witnessed an assault on African Guyanese with many of them being fired, charged and placed before the Courts, contracts terminated and lands’ repossessed.

Though not confirmed, the A Partnership for National Unity + Alliance For Change (APNU+AFC) Coalition has estimated that well over 1,000 Afro-Guyanese, who held Government offices, have been dismissed since August 2 despite being highly qualified.
Environmental and Petroleum Engineer, Dr. Vincent Adams; Environmental Economist, Dr. Mark Bynoe; Commissioner Trevor Benn, who  has a wealth of experience having served the United Nations Development Programme (UNDP) for over 11 years, and the  Public  Service for 25 years; Sherie Samantha Fedee, a career public servant with over 25 years of unbroken service; Colvin  Heath-London, a Business Consultant with vast managerial experience having worked on multi-billion dollar projects in the Caribbean, China and the Middle East; Attorney-at-Law, Amanza Walton-Desir; Economist, Dr. Clive Thomas; Major  (Ret’d) Aubrey  Heath-Retemyer and 38 employees at the now defunct State Asset Recovery Agency (SARA) are just a small percentage of those  dismissed at the hands of the PPP/C Administration.

Others have been hauled before the Courts, the most recent being Benn – the former Chief Executive Officer (CEO) of the Guyana Lands and Survey Commission (GLSC), who has been charged for misconduct in public office.
The charge is reportedly linked to the leasing of some six acres of land at Ogle, East Coast Demerara (ECD) to Janico Industrial Engineering Limited in 2017. Benn in rebutting the charge, said it is nonsensical. Former Health Minister and Chairman of the People’s National Congress/Reform (PNC/R), Volda Lawrence; Attorney-at-Law, James Bond; Chief Elections Officer (CEO) of the Guyana Elections Commission (GECOM), Keith Lowenfield; Deputy CEO of GECOM, Roxanne Myers; and Region Four Returning Officer, Clairmont Mingo are also among those charged.
The Political Scientist said while it is known that a change in Government often results in a change in personnel, the widespread dismissals, prosecution, and repossession of contracts and lands, targeting mostly Afro-Guyanese, are unprecedented here in Guyana.

“In all of my studies on Guyanese politics and my observation…I have never seen a situation, where a change in government has led to the kind of blatant assault that we have seen on one ethnic group,” Dr. Hinds said.
He said to compound the situation, the Guyana Police Force has been weaponized by the political directorate to target Afro-Guyanese including protestors and squatters as seen during the West Coast Berbice (WCB) protests and on the East Coast of Demerara, where the police opened fire on squatters.

“In effect, to say it has been a reign of terror is not an understatement. This has to be a cause for serious concern,” Dr. Hinds said.
Adding an historical perspective to the issue at hand, Phillips, who formed part of the panel discussion on Sunday evening, said there existed a “public policy” on Africans in Guyana since 1621 aimed at black under development.
He said it started with the enslavement of Africans, which saw them being stripped of their basic human rights. He said from Emancipation in 1838 to Independence in 1966, the rights of Africans were curtailed through policies that made it difficult for them to have access to lands, housing and business.  That suppression, Phillips posited, did not end in 1966 but continued to this day.
“In our book the Guyana Reparations Story, we showed the 15 discriminatory act that was taken by the Government, the Dutch Government, the British Government, and the Guyana Government that discriminated against Afro-Guyanese, and have left us where we are. If you look at the Village Movement, the attempt to destruct the village movement was a public policy, where the government tried almost 12 different things, taxes, flooding, to destroy African wealth,” Phillips said.
He said though this policy existed since 1621, it has gotten worse under the PPP/C Administration.  “We are in a situation where since 1621 public policy has been anti-black and anti-African development but now it is worse because of what this government is currently doing, and the worse statement I can make about our plight is that our politician not only do not understand history, they don’t understand the public policy that has occurred since 1621 and they are clueless in terms of what should be done for African Guyanese,” Phillips contended.

The ACDA Executive said in an attempt to reverse this trend, in July 2015, he had presented the then President David Granger and his Members of Parliament with a document called ‘Crisis’ and later in October, 2015, a 10 point plan for the development of African Guyanese. However, he contended that the APNU+AFC, while in Office, failed to adequately address the issue of Reparation for Afro-Guyanese.

“Why is it you are afraid to ask for reparation for your own people when it is justice, we have done all of the analysis, we have all of the information, we showed how many Africans died, we showed that 18% of Guyana was cleared, we showed the civilized state, we have all of this, they moved a 100M tons of earth with their arms for nothing. Indians were given lands, Portuguese were given lands, Amerindians were given lands; so, why is it that this political party that so represents African Guyanese afraid or a shame to do what everyone else is doing for themselves. So we need affirmative action that is institutionalized.”

Weighing in on the discussion, Lewis, like Dr. Hinds and Phillips, made a case for affirmative action and a new paradigm shift.  Lewis supported Dr. Hinds’ proposition that there be a coming together of Afro-Guyanese Groups and Organisations for the creation of an African Guyanese Developmental Plan.

“We have to, we have to ensure that things are better than they are, we have to fight back,” the Trade Unionist said.
SAGE, according to Dr. Hinds, will take the lead role in organizing and executing a summit that would result in the creation of a single plan to chart a way forward for the betterment of Afro-Guyanese.
Further, the Political Scientist made a case for a Black Cultural Revolution in Guyana that would include a mass educational campaign on Black History and Black Culture.  Dr. Hinds said it is time for racial consciousness, contending that race neutrality has only resulted in the disempowerment and under development of African Guyanese.
Phillips also made a case for the establishment of a commercial bank specifically designed to meet the financial needs of Afro Guyanese.

“We need a bank, we don’t need a credit union, we need a bank that is going to allow us to go after institutional funds and international funds and investments and also have a correspondent bank so that we can monetize…,” he posited.
In a recent report published by Village Voice News, renowned Guyanese Businessman Terrence Campbell had said it is becoming increasingly evident that Commercial Banks in Guyana are discriminating against Afro-Guyanese, forcing them to pay interest rates significantly higher when compared to other ethnicities. As such, he had made a case for the passage and implementation of an Equal Credit Opportunity Act to guard against discrimination in the banking sector. The legislation, if adopted by Guyana, would prohibit credit discrimination on the basis of race, color, religion, national origin, sex, marital status, and or age.