A telephone call from the beach to the Minister

I was on the Eve Leary beach of the Atlantic Ocean very early yesterday morning with my dog. It was about 6.30 am. A number of vendors came up to me and showed me a letter from the Ministry of Public Infrastructure asking them to immediately vacate the area. One of them said that ministry officials have been demolishing some vendors’ stalls since last week and it is continuing.
They said last Saturday, a barbecue stand was demolished. They showed me the remnants of the structure owned by an Amerindian woman who sold there for years. I know this lady because I am a fixture on the Camp Street seawall
As these people spoke to me, I felt sick to my stomach. Was this what I helped to change the PPP for? I fought, literally “fight down” the previous Minister of Works over his wanton, reckless, heartless, bestial destruction of the income of these types of citizens. This newspaper nicknamed the Minister, “Bruck Up Benn.”
I almost got arrested when Benn sent his crew to chase off some young women who were selling bottled water at the junction of Irving and Lamaha Streets. I remember during the election campaign of 2015 telling those young ladies that when Benn goes, no one will harass them. My God! How wrong I was. 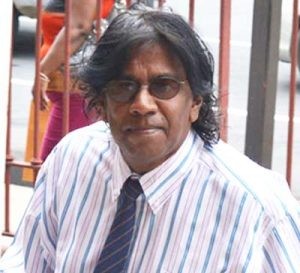 Those women are still selling on that very site; will Patterson move them?
I didn’t care how early it was in the morning. I rang Minister David Patterson to complain about his action against these vendors. My first words to him were; “David, this is the Christmas season man. How could you move them at this time?”
As he spoke, my eternal bad habit kicked in; I was arguing with him. In an angry tone, he accused me of not wanting to share the ideas of others and I am only concerned with what I believe in.
Minister’s Patterson’s position was inflexible. According to him, these vendors are an eye sore; the place is very dirty. He accused them of having old fridges all over the place hindering traffic. He intoned that they defecate all over the place. He said people get robbed in that vicinity all the time.
I rejected all those accusations because I know this environment in ways David Patterson will never know. I know all these vendors in ways David Patterson will never know. If David in his entire life has visited that area 1000 times, I would have exceeded that by one billion times.
Let me meet head on each accusation of the Minister. It is not true the old fridges are all over the place. I spend an inordinate amount of time on the Camp Street seawall and I do not see those fridges scattered across the parapet and on the seawall road. I have never seen these fridges obstruct traffic.
Do the vendors relieve themselves right where they sell? Anyone can visit the site and you will see four portable toilets. The vendor outside the DPP Chambers has a portable toilet.
I will not dignify the asininity of David Patterson’s crude emanation that the place encourages robberies. In Guyana there isn’t a place that is safe from criminal harm. As I type this column, one hour ago, my daughter’s friend rang her to say she was in a taxi and as it slowed, a guy grabbed her bag with all her money, identification papers and smart phone right in the heart of the city.
The young lady had a few photographs of her dead mother that she cherishes. If anyone is reading this, please contact me so we can secure her ID and those photographs; there will be no police involvement. We don’t need the return of the money or phone just ID and photographs. My cell is 614-5927. My home is 222/1615 and 222/1616.
I ended my conversation with David with the words that he will hear from me in 2020. I promised my wife that my campaign days were over. But with each passing day as I see how bestial is the mistreatment of poor people by this government, I know I will be on the street corners for the 2020 campaign. I will never vote for the return of the PPP. I am not voting for the APNU+AFC. No other small party gets my attention. I certainly won’t vote for Ramon Gaskin’s party.
But if a credible third party comes up, I will give it consideration and I know one is being formed. In the meantime, is there any group that feels that it should help those seawall vendors? No! I doubt it! This is Guyana!