Hello, I’m Dolly! Vote for me! 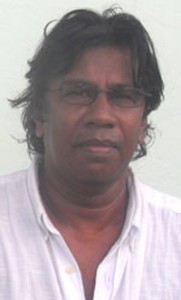 Dr. David Hinds wrote recently that Mr. George Abraham, an overseas-based Buxtonian, opened a small business in Buxton and invited four Ministers to attend the ceremony but none did. In angry tones, he intoned that many Ministers have graced the ceremonies of newly-established big businesses. To verify this, all you have to do is Google Giftland Mall, Farfan and Mendes etc., and you will see the Ministers did attend the opening of those expensive establishments.

Obviously, you cannot blame these entities for requesting the presence of Ministers. You have to blame the Ministers for not showing a little recognition to small entrepreneurs. This is what David did.
So why not one of the four Ministers turned up? The answer lies in the song, “Hello Dolly.” Ministers will not show respect for villagers who do not respect themselves. Politicians will not show respect to vendors who don’t have dignity. Politicians will not bestow recognition on poor people who do not display common sense. In the end these categories of people will always be treated shabbily by the corridors of power because the power establishment thinks they are Pavlovian creatures and they may be.
I point you to my column of March 16 titled, “Charles Barkley on the stupidity of poor people’s politics.” That column looked at the way basketball icon Charles Barkley perceived of the politics of poor people. Barkley believes that they are stupid to allow politicians to use them. The story of Guyanese East Indian is a terrible lesson in the Pavlovian world of poor voters.
Rural folks complained to critics of the PPP about everything under the sun. As soon as I touched down in any area, you were greeted with complaints. Some of them were heart-breaking. Two women told me how their menfolk were killed in car accidents and there wasn’t even a preliminary probe by the police. In one incident, the driver was from a well known Berbice business place, the other driver was the then officer in charge of Berbice.
For more details of this incident and the complaints of Berbicians over mistreatment by the then PPP Government, see my column; “Face to face with evil in Berbice last Saturday evening,” KN, January 19, 2015. I subsequently found out that these two women were openly seen at PPP rallies during the May 2015 general elections.
What rural folks need to understand is that if you embrace selfish, elitist politicians, what psychological motive do they have to listen to your plights and help you? Analysts lost their patience with East Indians since the 2006 elections because they are mentally paralyzed to act against the power madness of Jagdeo.
What happened between the PPP Government and rural Indians for over twelve years during the oligarchic excesses of Jagdeo and Ramotar is set to repeat itself with African Guyanese and the PNC. The only glimmer of hope was the voting pattern at the last local government elections. Independent Black groups with overt Black leadership pulled substantial votes.
One would have thought with the PNC back in power and the upright figure of President Granger, APNU-AFC would have devastated those Black Independent candidates. But that was not to be. In Bartica, APNU-AFC were suffering bouts of apoplexy when an Independent entity named BIGA, challenged APNU-AFC for the loyalty of Barticans. The ruling coalition prepared the war machine. During the campaign, three Ministers for each week leading up to polling day visited Bartica.
One Minister threw away protocol and referred to himself as a Minister at two of the public meetings. Ministers by protocol should not put on their Cabinet hat when they are speaking at political campaign rallies. One Minister told the crowd, “You have heard my Cabinet colleagues address you, now it is my turn.” He did not say, “My political colleagues.”
Come 2019 and 2020, the prodigal sons and daughters who did nothing for Black people, will return to Buxton to collect votes. The employees of Mr. Abraham will welcome the beautiful Black woman by the name of Dolly from APNU-AFC, who, with her long African print dress and floral tiara, will smile and wave to the ecstatic crowd. Mr. Abraham will strike up the band with the song below;
I said hello, Dolly,
Well, hello, Dolly
It’s so nice to have you back where you belong
You’re lookin’ swell, Dolly
I can tell, Dolly
You’re still glowin’
You’re still crowin’
You’re still goin’ strong
I feel that room swayin’
While the band’s playin’
One of your old favourite songs from way back when
So take her wrap, fellas
Find her an empty lap, fellas
Dolly’ll never go away again