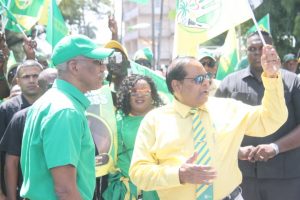 Prime Minister Moses Nagamootoo Tuesday night condemned the Global Witness report that concludes that  the 2016 ExxonMobil deal amounts to a US$55 billion giveaway, instead saying that government fast-tracked negotiations to prevent the company from puling out due to Venezuela’s claim.

Nagamootoo criticised Global Witness’ call for a suspension of oil production to pave the way for renegotiation of the contract. He cautioned against demanding more money because the country risked the investors walking away.

Addressing a general election campaign meeting at Plum Park, Sophia, he sought to justify the signing of the agreement expeditiously because of Guyana’s need to preserve its territorial sovereignty in the face of Venezuela’s aggression. “We stood up and we decided that we would have to negotiate and negotiate quickly before the oil company pull out from Guyana. We knew that we were under threat and they gave us a cash signing bonus of US$18 million so that we take the best lawyers in the world to defend our territory, to defend our land, to defend our oil and gas resources,” Nagamootoo said in a fiery speech.

Government, in a statement, says it “maintains its position that there were geo-political and national security imperatives which could not be ignored. The report deliberately seeks to trivialize the national security and sovereignty of Guyana.”

An independent investigation by the United Kingdom-headquartered international law firm, Clyde and Company,  into the negotiations and signing of the 2016 agreement has found that EEPGL/ExxonMobil insisted that the money must be used only for Guyana’s legal fees in challenging Venezuela’s decades-old claim on the Essequibo region at the International Court of Justice (ICJ). “The impetus for the signature bonus had come from the Ministry of Foreign Affairs. It had been discussed with the Contractor Consortium as Guyana required sufficient funds to fight the territorial controversy with Venezuela in the ICJ. The Government gave assurances to the Contractor Consortium that US$15 million of the signature bonus would only be used to fund the proceedings with Venezuela in the ICJ,” the Clyde and Co report states.

Within the last three years, the United States (US) had for the first time unambiguously stated that it recognises Guyana’s existing borders.

The Prime Minister accused the United Kingdom-headquartered anti-corruption international non-governmental organisation of attempting to interfere in general and regional council elections slated for March 2, 2020. “This group that was brought here to and time its release just before the election is meant to confuse your mind that when we negotiated for two percent royalty and fifty percent share in the profits of the oil that we sold  the Guyanese people out,” he said.

Government representatives have already explained that the formula provides for the ExxonMobil-controlled Esso Exploration and Production (Guyana) Limited to recover its investment at a rate of 75 percent from gross revenue and earn profit of 12.5 percent. Guyana is expected to get the two percent royalty and 12.5 percent profit oil.

In a separate statement, the Guyana government  pointedly accused Global Witness of attempting to sway voters at the polls. “The Government of Guyana views the report as a cunning and calculated attack on a sovereign state with a duly elected Government mere weeks before an election. This timing cannot be seen as a coincidence and it appears as though it is seeking to influence the electoral outcome,” government says.

Government maintained that there was no corruption in the 2016 agreement and the entire Cabinet had been involved in the process. “Global Witness was unable to establish any corruption or malpractice whatsoever on the part of Government, or any of its officials. At all material times, officials of the Government of Guyana acted with the knowledge and authority of the Cabinet and on the basis of credible advice,” government said.

But, Global Witness accused Minister of Natural Resources Raphael Trotman, who had been responsible for the petroleum sector at that time, of ignoring experts’ advice that a proper assessment ought to have been carried out before sealing a new deal with ExxonMobil.

“Trotman had reason to know that his Stabroek negotiation terms were weak. On Friday June 24, prior to signing the deal, he sent the terms to an oil industry expert for review. Working quickly, the expert responded on Monday the 27th. In a brief, the expert told Trotman that Guyana needed far more information about the value of Stabroek and what a fair deal would be.

Around the same time, Trotman requested advice from a second oil expert. According to the expert, he also told Trotman that the government needed more information about the economics of Stabroek before signing and even suggested where Guyana could get money to hire advisors,” Global Witness says.

Global Witness believes that Minister of Natural Resources, Raphael Trotman knew Exxon would have soon announced the results of its newest exploration well – Liza 2 – informing Guyana just how valuable Stabroek would be. In May 2016, Trotman wrote that Exxon had “encountered” “hydrocarbon shows” at Liza 2 and that he understood Exxon would announce its results on a specific day: June 28 2016.

“Yet Trotman does not appear to have effectively used this information to Guyana’s advantage. Global Witness is not aware whether Exxon told Trotman or other Guyanese officials about its Liza 2 find before the company announced them publicly. However, if Exxon did not, then Trotman signed Stabroek only one day before he believed Liza 2 – one of the world’s largest recent oil finds – would be announced. Of course, if Exxon had told Trotman about Liza 2 before he signed, then the minister approved a deal with weak fiscal terms despite knowing that Guyana was now a leading oil hotspot. Ultimately, Exxon did not publicly announce Liza 2 on June 28. But the company did not wait long: only two days later, on June 30, Exxon announced Liza 2 and for the first time told the world just how much oil it had found in Guyana – then estimated at up to 1.4 billion barrels,” Global Witness adds.

Clyde & Co appeared to agree with the strategic geopolitical importance of ensuring that EEPGL/ExxonMobil remain in Guyana due to its inherent links with US government interests and so act as a counterbalance or deterrent against the militarily superior Venezuela that has flexed its muscles against Guyana in the past over its claims to the Essequibo region. “It is understandable why the protection of Guyana’s offshore oil and gas activity in the face of military action by Venezuela became an urgent matter of national security, and in turn why decision-making in relation to these issues was elevated to higher levels, such as the Ministry of Foreign Affairs,” the investigation finds.

The Guyana government described as a “preposterous assertion that Guyana “should allow no additional drilling in the Stabroek license” and “should also cancel its nine other allocated licenses and not award any new licenses”. “This is arbitrary and utterly absurd. On what basis does Global Witness seek to impose its proposition that the people of Guyana must not benefit from our natural resources as the peoples of other countries have done freely for millennia?”

Government boasted that Guyana was benefitting fr0m withholding taxes, the US$18 million signing bonus, direct employment of more than 1,900 persons in the oil and gas sector so far, over US$300M in foreign direct investment and more than 700 service providers.